Marty holds a B.S in natural resources and a PhD in sociology from The Ohio State University.  Her specialty areas include gender, sexuality, inequality and social movements, with an emphasis on violence against women.  She has  testified on issues relating to women, violence, and economics to legislatures in Ohio and Tennessee, and has served on numerous local and state committees and commissions on the well-being of women and girls.  Marty has been cited in a variety of print news including The New York Times, Chicago Tribune, USA Today, Cleveland Plain Dealer, and Columbus Dispatch.  She's also appeared on The Oprah Winfrey Show, A&E’s Biography, ABC’s Day One, ABC, NBC and CBS news affiliate programming, as well as documentaries for the BBC, Italian Public Broadcasting, and Oxygen Channel/Nancy Glass Productions.

Doug is a political and community activist and a refugee from Silicon Valley. He has formed a number of small non-profits and served on local and state boards. Born in the Midwest, he has lived on both east and west coasts. His primary interest is in the effects of fear in our society, particularly ending violence against women, human trafficking, and assuring that children grow up free from the threat of violence.

When he asked "Why do they call domestic violence a 'women's issue' when it is primarily men who cause it?" Marty knew he would be an ideal co-host for this podcast.

Doug has passions for American history, independent film, and baseball. He has also appeared on PBS and the History Channel.

Steve is a videographer and computer analyst.  He also owns a business converting old slides, home movies, photos, records and videos to digital format, Preserve Your Memories. Check out his Facebook Page!

Love our theme song?  So do we!  For info on Gretchen's concert schedule and to purchase her cd's, check out her website: 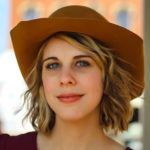